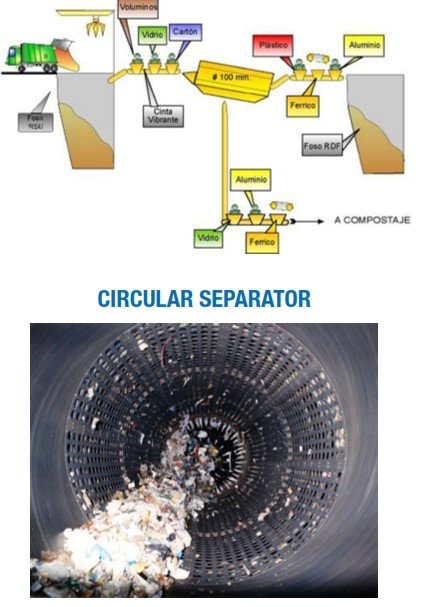 The method for treating waste materials is a process which involves the introduction into a loading system of a measured amount of operating fluid, followed by the waste materials that are to be treated. The process continues by adding a catalyst and a neutralizer in the inert atmosphere of the system.

The mixture now made up of operating fluid, waste materials and additives is then heated via kinetic energy conversion into thermal energy. This triggers a catalytic molecular restructuring reaction of the waste materials. The operating fluid is transported by the water vapor and separated from the water found in the solid waste, and from that produced in the reaction, and re-circulated. The mixture derived from the catalytic molecular restructuring reaction, which is also separated from the operating fluid, is then treated to obtain synthetic fuels.

These problems lead to a growing demand for a greater quantity of cleaner energy at lower costs, for which we can offer two types of alternative energy:

The “Ercolli Marelli Technology” is capable of transforming a wide variety of organic materials (waste and/or raw materials) into a liquid fuel through a process using low temperatures and pressure. These conditions allow us to control environmental emissions.

The Company’s technological innovation is a system which simultaneously eliminates organic waste and produces electrical energy with no negative impact on the environment.

The catalytic molecular rearrangement process carried out on different materials can be scientifically described as follows:
A particular material with a generic formula of CxHyNzOwSvCln, characterized by a specific high heating value, is able to produce a synthetic liquid fuel with a C(x+n)H(x+n1) formula, that has a higher heating value when compared to the material originally introduced.  Moreover as a result of the catalytic process, Ercole Marelli technology provides for the removal of heteroatoms (oxygen, nitrogen, sulphur and possibly chlorine) from the given material.

The molecular rearrangement occurs with the introduction of the appropriate catalyst and suitable neutralizing agents that promote the transformation of the heteroatoms in the corresponding alkali and/or alkaline-earth metal salts.  Molecular rearrangement, which is the key feature of the Ercole Marelli process, is based on cracking reactions followed by reforming, radicalic quenching and chain termination reactions, possibly by Diels-Adler cycloaddition reactions. In theory, thermal cracking and catalytic cracking processes can occur.

The first process is facilitated by free radicals produced by homolitic scissions of C-H, C-C, C-O, C-N and O-H bonds, and the chemistry involved is standard, with carbon, oxygen and hydrogen radicals. In the catalytic cracking event, there are two different mechanisms: one involves carbocations and the second one radical species. Carbocations are mainly generated from the Brønsted acid sites which are present in the silicate aluminum catalyst framework. The formation of radicals is facilitated by the Lewis acid electron acceptor sites found in different forms of amorphous alumina.

Different reaction mechanisms which operate in a holistic manner during the process are triggered by heating which has been achieved by material friction at approximately 350°C.  The presence of a suitable catalyst (mixed aluminum zeolitic silicates), allows the process to be carried out at low temperatures.  The core system has a diathermic fluid centrifugal reactor which facilitates the conversion of kinetic energy into thermal energy, and produces a corresponding increase in the temperature of the fluid.